Kings Camp has been blessed with the first big rains of our summer, creating raging torrents in our bone-dry riverbeds for a few days and filling up our waterholes. Soaking the scorched earth almost immediately brings about a wondrous change in the landscape, as new green leaves appear on the trees and bushes, and green grass starts appearing in between the dry grass of winter.

Just below the surface of the sand, millions of creatures stir with the softening and moistening of the earth. We start seeing these creatures appearing- creatures we have not glimpsed for months! How do they survive the dry winter months and why do they suddenly appear after the rains? 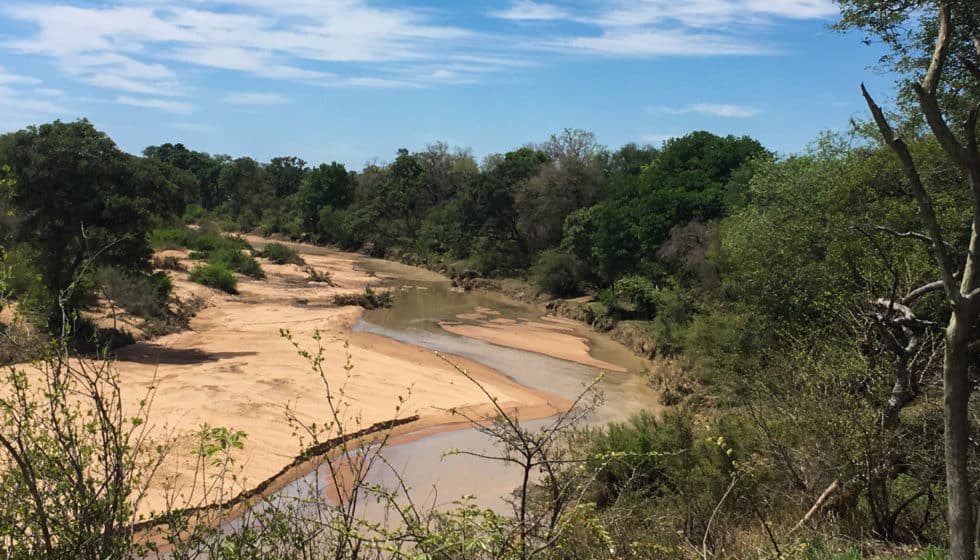 Frog calls tell of the beginning of spring. All frogs require some form of moisture in order to breed, and in the Lowveld region of South Africa where rainfall is very erratic, frogs need to exploit opportunities when they arise, such as after suitable rainfall.

The bushveld rain frog (Breviceps adspersus) spends most of the year underground, buried 15-30cm below the surface, often near to rocks, logs or tree roots where the soil has more moisture. It forms a mucous cocoon around its body, which completely seals the frog while it remains buried. Metabolism slows, water loss is reduced, and they can hibernate throughout the dry winter months or even for years if conditions are not suitable for breeding.

The frogs emerge in spring or early summer, following heavy rain, to breed. They don’t rely on pools of water to breed like other frogs, but dig back into the earth to lay eggs in an underground chamber. Eggs are deposited in a thick jelly, which protects and hydrates them, even after the tadpoles hatch, until they emerge as tiny replicas of the adults.

The Southern foam-nest frog, or grey tree frog, (Chiromantis xerampelina) typically lives in trees and sometimes in human habitations. They are cryptically coloured to camouflage against the substrate they sit on. They can also lighten their skin colour to almost white when heat stressed to reflect heat and avoid drying out, and will secrete a film on the skin to protect it. They may stay in the same spot for weeks at a time in winter, with their legs folded in under the body.

Breeding takes place from October to February, with males establishing calling sites in trees overlooking water. Once having attracted a female, the mating pair whip up a froth that is secreted by the female, to surround the laid and fertilized eggs against desiccation. The foam nest hardens on the outside, protecting the eggs from the environment and predators, and slowly dissolves after about a week until the tadpoles hatch and drop into the water below.

Termites are social insects that typically live in distinctive nests called termitaria that are built of soil. Despite appearances, they are totally unrelated to ants. They are primarily nocturnal, and do not have the dark pigment melanin, so they are creamy white in colour.

Termite colonies below the earth are kept to a constant temperature with the help of spired mounds and chimneys. Termites will also tunnel deep down to the water table to access water for the colony.

Termites establish new colonies by producing winged reproductives, called ‘alates’ or ‘flying ants’. Following a good rainfall, the alates are released from the colony on their ‘nuptial flight’ which happens only once a year for each colony and is a short flight until males and females from different colonies meet, shed their wings and start to dig down and build a new colony. The body of the female will expand and she will start producing eggs.

The name means ‘thousand legs’ but the most on any species of millipede is around 400. Millipedes are invertebrates with hard cylindrical bodies, and are detritivores – they eat rotting vegetation and fungi. Millipedes are commonly called ‘shongololos’ in South Africa, derived from their Zulu name.

Millipedes do not have a waxy cuticle on their exoskeleton so they cannot control their moisture loss. Therefore they hide away during the dry months, usually burrowing vertically into the soil down to suitable moisture and temperature conditions. They appear after rains in large numbers when conditions are better suited to them – damp, moist or humid. 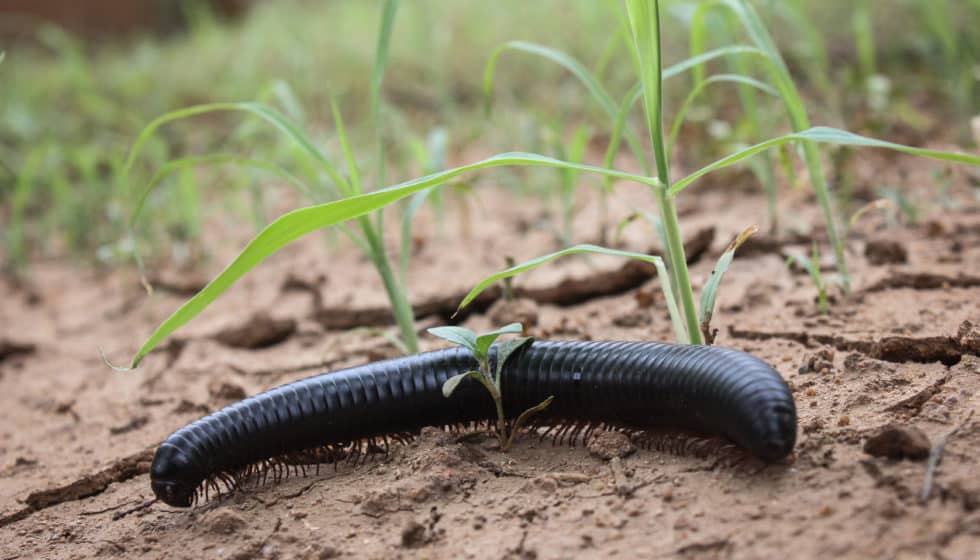 The giant African land snail (Achatina fulica) is one of the largest terrestrial snails, with the shell growing to the size of a tennis ball. It is commonly seen during the wet season as it has a soft body and so requires moisture to avoid desiccation. It is usually active at night when it is cooler, hiding in damp vegetation during the day.

Sometimes they can estivate during very hot conditions, keeping moist by secreting a layer of mucus that creates a barrier around the body. They also use this mucus to provide an airtight seal and stick to a surface to protect the snail from drying out and to stop predators from accessing it. 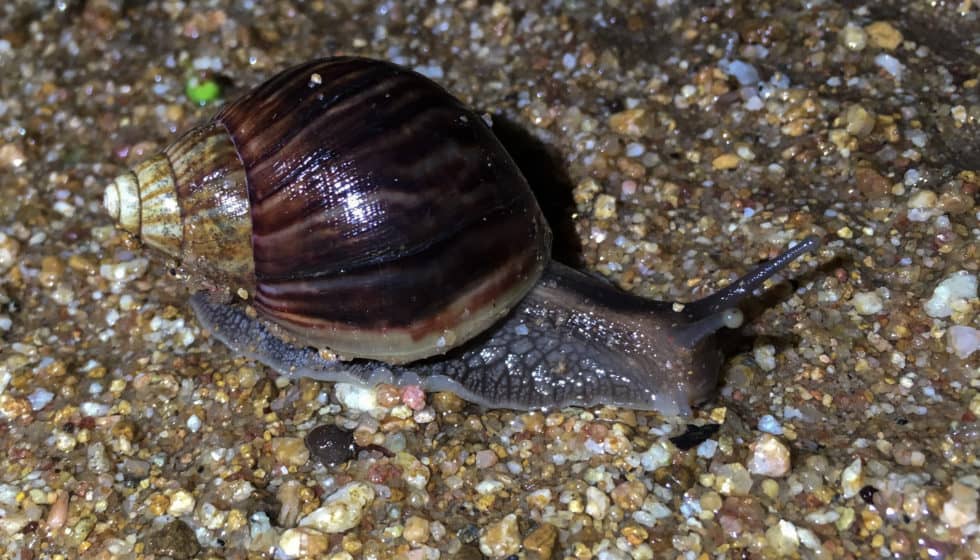 Dung beetles (or scarabs) eat and lay their eggs in animal droppings. There are about 7000 species of dung beetles worldwide. The most conspicuous dung beetles are the telecoprids, or ball rollers, such as the large copper dung beetle (Kheper nigroaeneus) in the photograph.

A pair of dung beetles will make a ‘nuptial ball’ which they will eat together following mating. A ‘brood ball’ is rolled to be eaten by the larvae after eggs are laid inside. This brood ball is buried and the outer layer hardens to protect it and to keep the inside moist.

Dung beetles are dormant in the dry season when there is little moisture, so dung piles in the winter are often untouched. When the heat of summer and the first rains arrive, the bush starts buzzing with the sound of flying dung beetles and dung piles become a hive of activity.

Did you know that in one pile of elephant dung there could potentially be 16 000 dung beetles? Take care not to drive over elephant dung on the road, as these little beetles are incredibly important to our environment. They bury a huge amount of dung, removing the waste and reducing pests, return nutrients to the soil, facilitate the germination of seeds and are a food source for a large variety of birds and mammals. 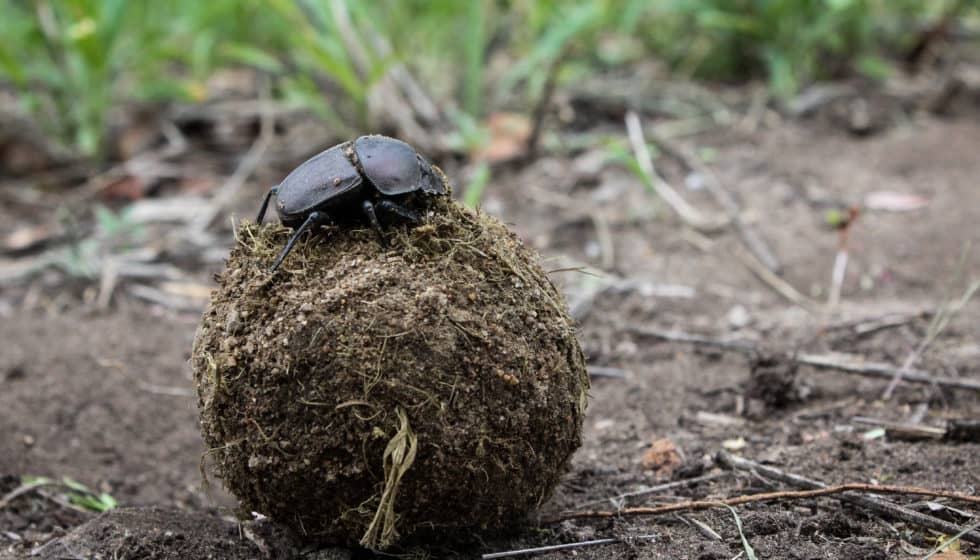 The serrated-hinged terrapin (Pelusios sinuatus) is aquatic, living in temporary or permanent fresh water pools. When the water dries up, they burrow into mud or soil to aestivate. This is a state of dormancy – similar to hibernation – that takes place during periods of high temperatures and dry conditions.

When they emerge in the wet season, they may migrate across land to isolated pans and waterholes. Watch out for them walking across roads!

This terrapin has a hinge on the plastron (lower shell) just behind the front legs that can close when the head and forelegs are withdrawn, to conceal them completely. 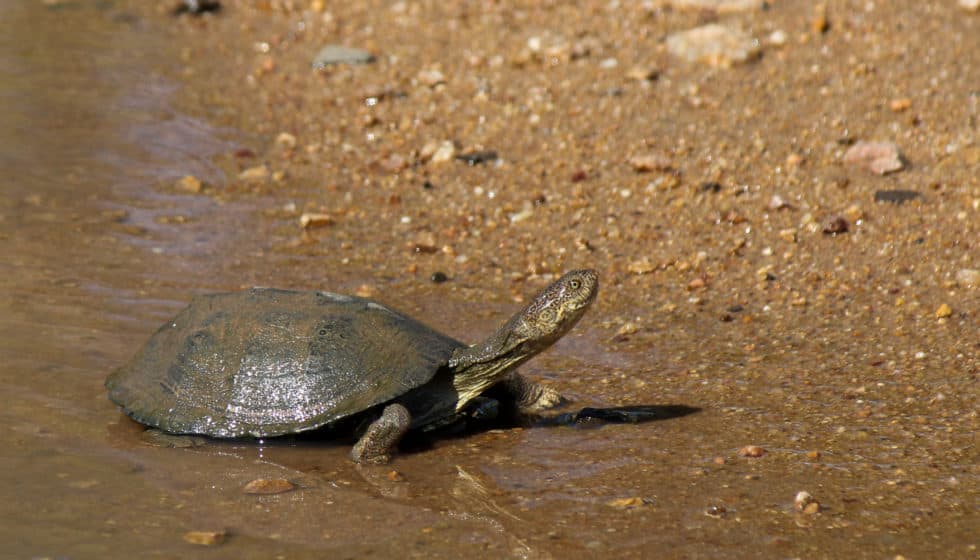 The most common tortoise to see on safari at Kings Camp is the leopard tortoise, (Stigmochelys pardalis) which is the largest tortoise species in southern Africa. It derives its name from the dark spots on its carapace, which look similar to the rosettes on a leopard’s coat!

During the cold winter months, the leopard tortoise shelters in holes in the ground, or areas among rocks or under logs. They may stay in this dormant state for weeks while it is cold, emerging at times to bask.

The tortoise stores water during the dry months in a ‘bursa sac’. This reserve is used for hydration and to moisten the ground in order for the female to dig to lay her eggs. One must never pick up a tortoise during the winter months, as it may eject its stored water as a deterrent, and may die of dehydration after having done so.

They are most active during the summer months when food is plentiful, so that they can build up their food reserves for the long winter. They may be active throughout the day depending on the temperature. During the heat of the day they rest in thick vegetation.

Leopard tortoises have an extended breeding season, from September to April. Clutches of hard-shelled eggs are laid between October- May. Incubation is slow, and can be more than a year! After hatching, juveniles may have to wait in the next chamber for an extended time before rain softens the ground before they are able to dig themselves free. 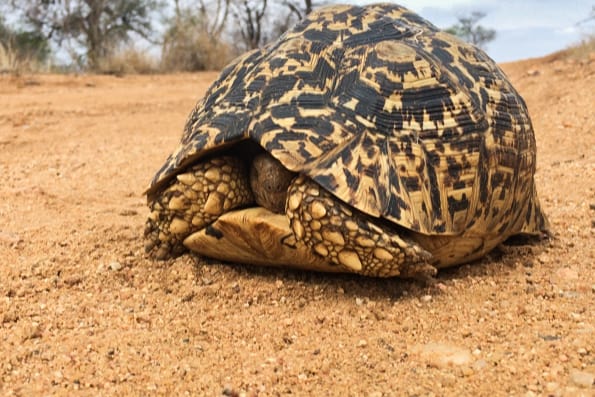 2 thoughts on “After the Rains”