When I first started working as a field guide 3 years ago, I heard stories about the Timbavati Game Reserve – a huge area of pristine wilderness adjacent to and joining the Kruger National Park, boasting an incredible diversity of animal life and beautiful natural surroundings. 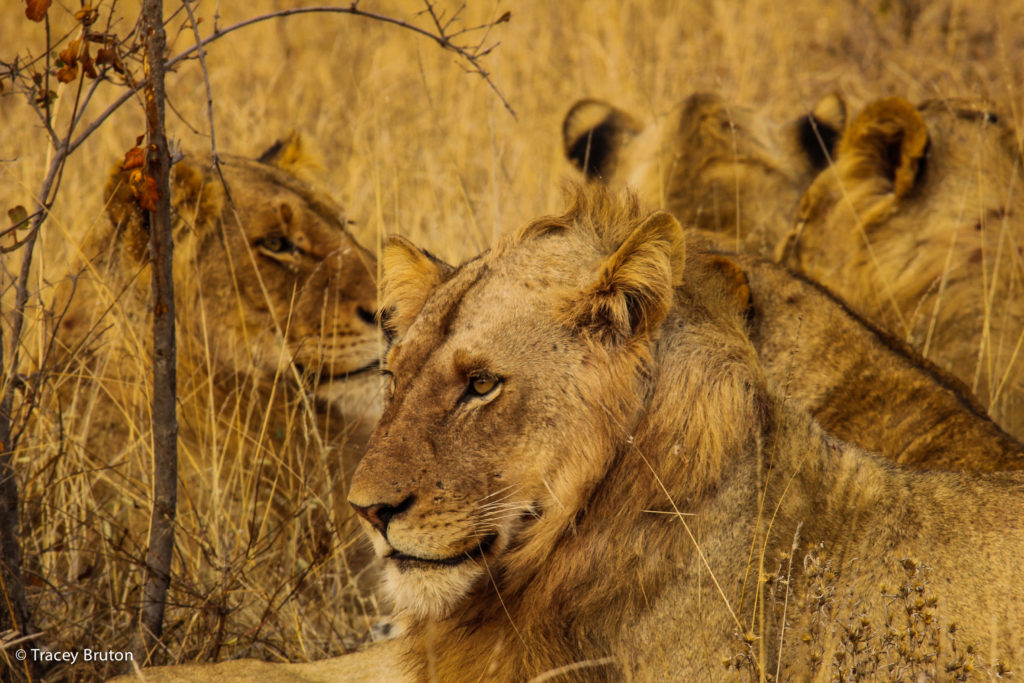 This year in August after working as a guide in several reserves such as Pilanesberg National Park and Thornybush Nature Reserve, I heard about an opening for a female guide at Kings Camp. My predecessor Anna was leaving as she was expecting twins, and promised me that I was taking over “the best job in the world”! 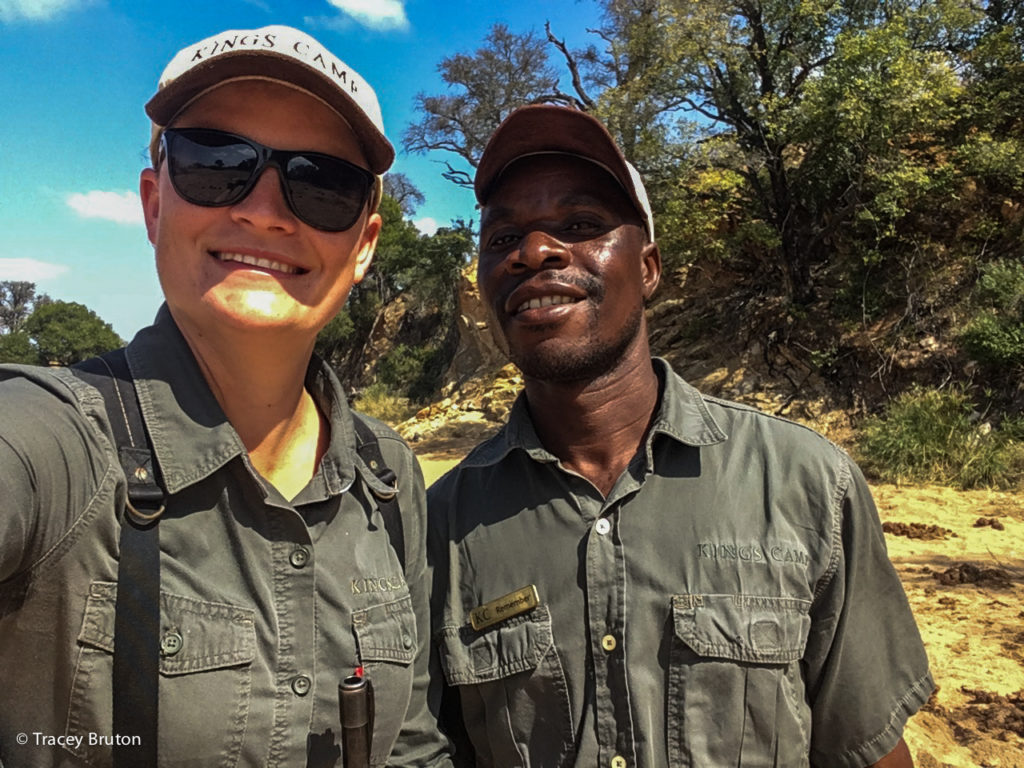 Immediately upon starting at Kings I was welcomed with open arms by the entire family. The entire staff component has patiently helped me to hit the ground running as part of the team, and all are genuinely good people who I am honoured to call my friends. 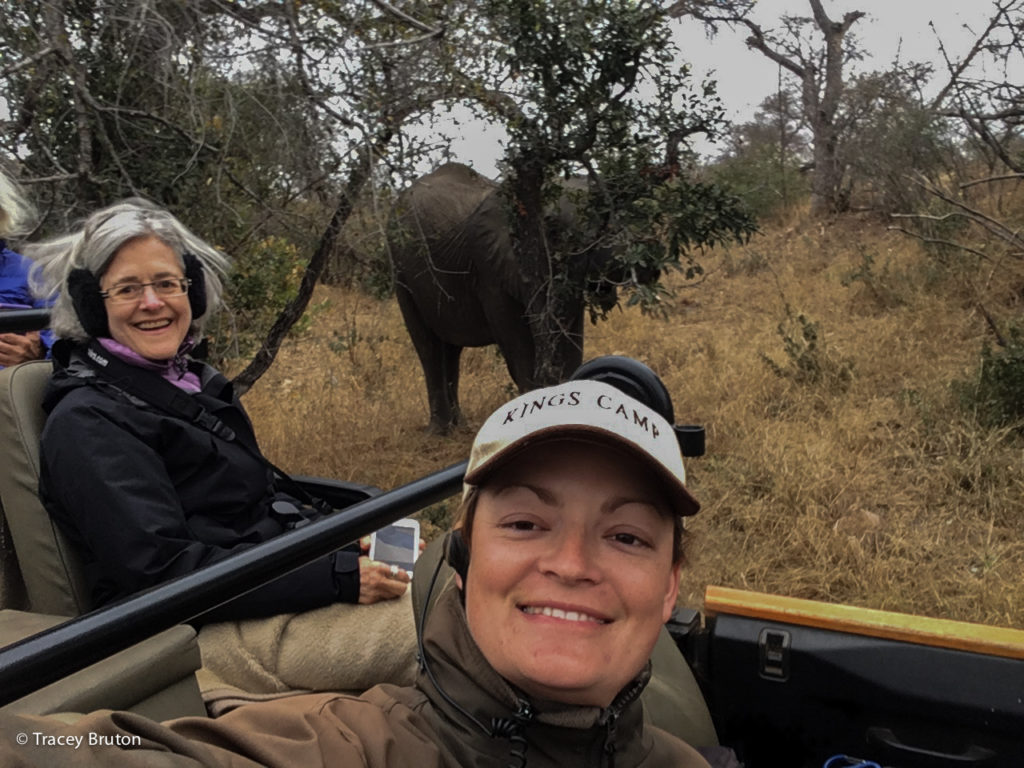 My tracker Albert has been at Kings for 16 years already, and has an incredible knowledge of the roads and resident wildlife. I could not do it without him, as the guide and tracker team is one that is very important, and trust and good communication is imperative! 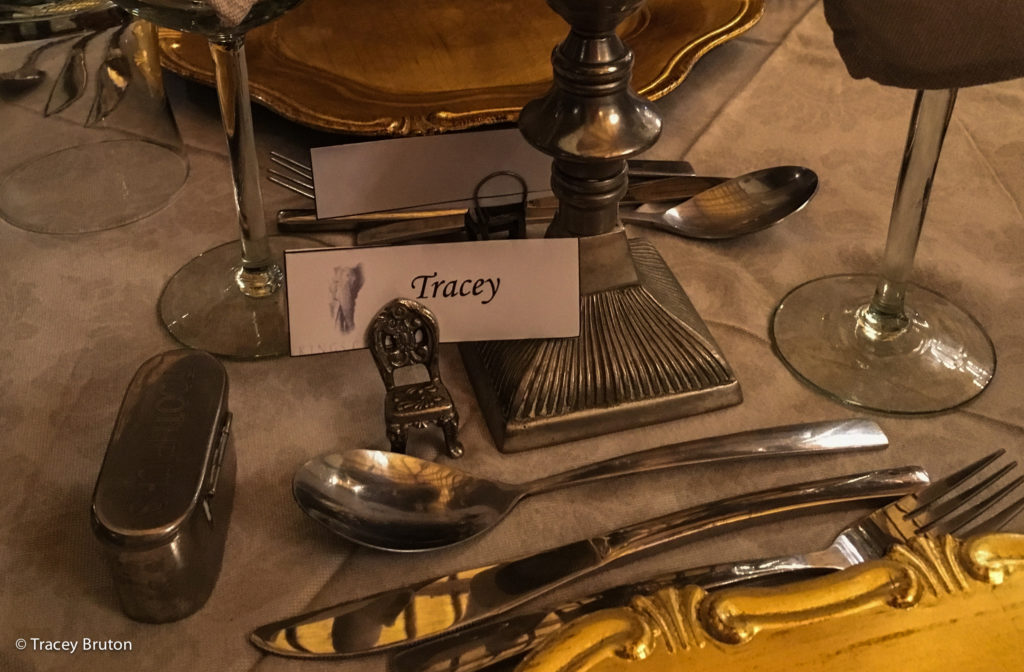 The game viewing is phenomenal. There are several resident leopards literally on our doorstep, every so often even entering the camp grounds or on its outskirts, resulting in a cacophony from the vervet monkey population. On one game drive in my first week we had the absolute pleasure of seeing three different leopards each only 100m away from each other and all enjoying separate kills! 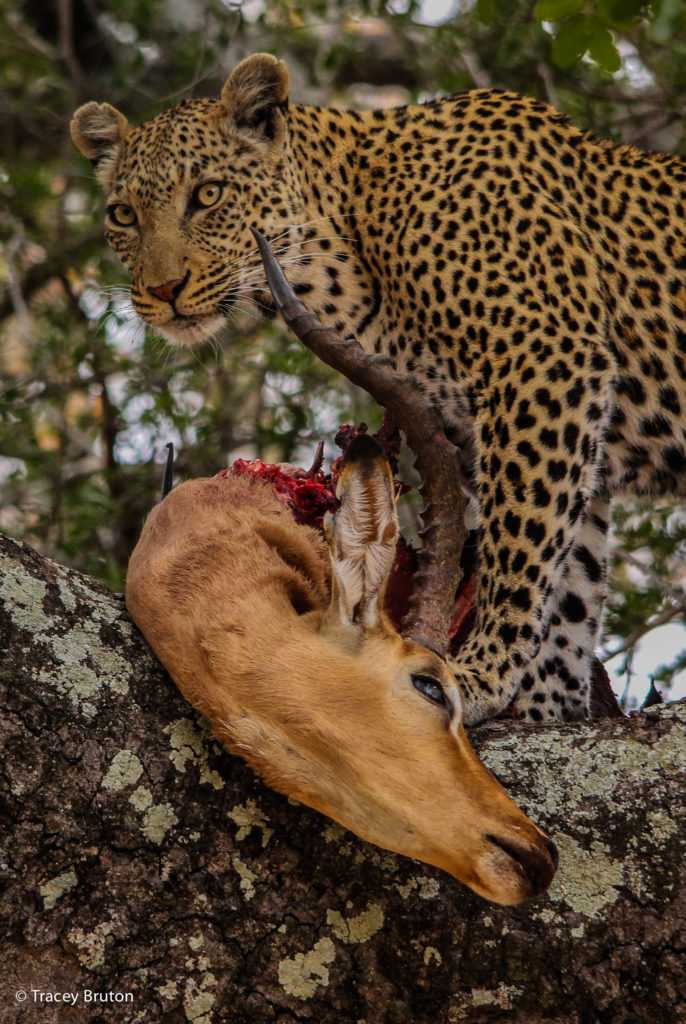 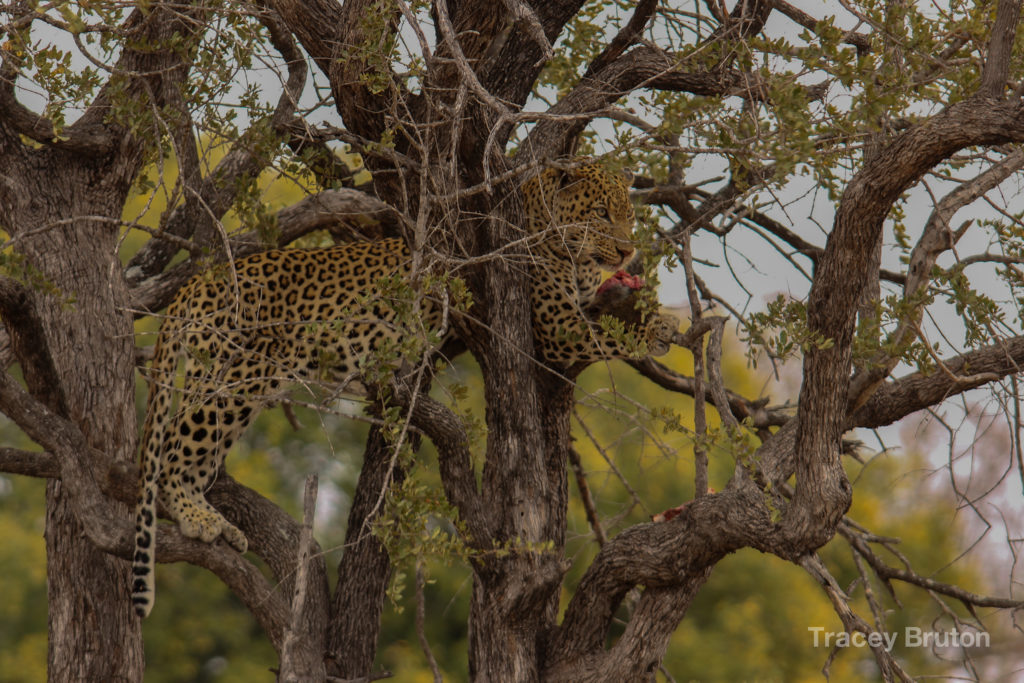 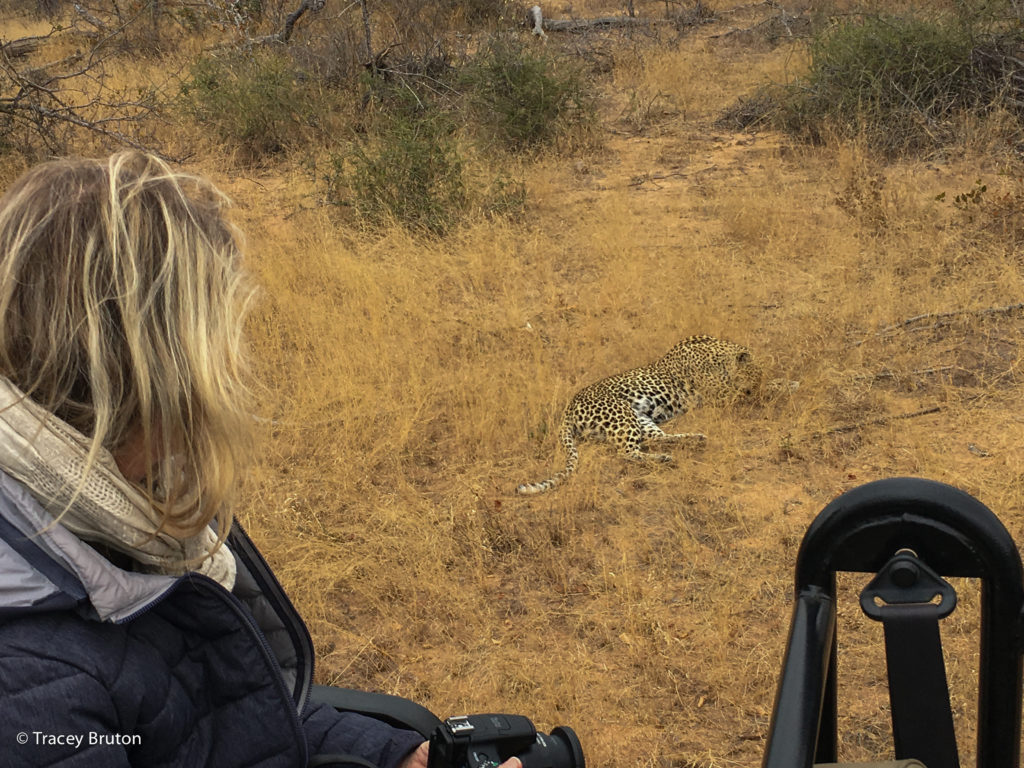 Elephants are so comfortable with the vehicles that they approach and feed around us and walk past us without even giving us so much as a glance! Their cheeky calves build up their bravery by flaring their little ears at us and crashing through the bushes trying to intimidate us, while mom chomps on vegetation calmly nearby. 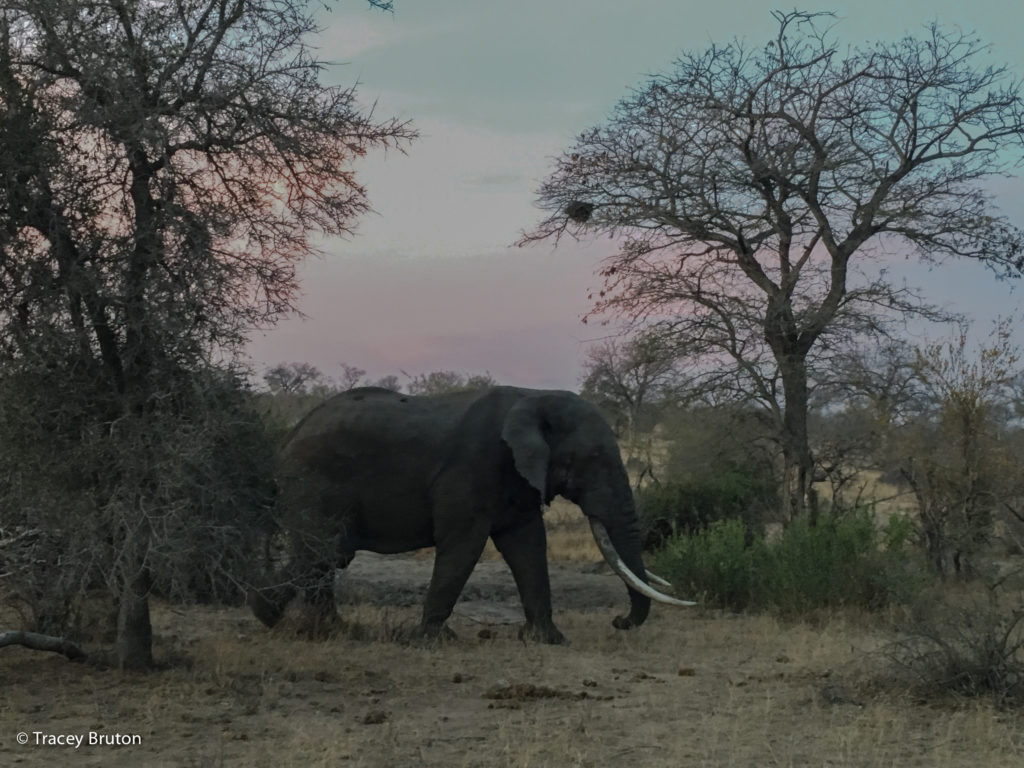 On night drives I have seen creatures such as African wild cat, honey badger, owls, jackal, spotted hyena, genet and bushbaby. Impala, bushbuck and nyala often jump over the electrical fence in the camp and graze on our lawns, relatively safe from predators. A confident little squirrel often scuttles into my room during the day. My bird list is already over 100 species, having had sightings of birds such as martial eagle, barn owl, pearl- spotted and African barred owlets, giant eagle owl, kori bustard, bateleur, Southern ground hornbill, African harrier hawk, saddle billed stork, purple-crested turaco and white-backed vulture to name a few. 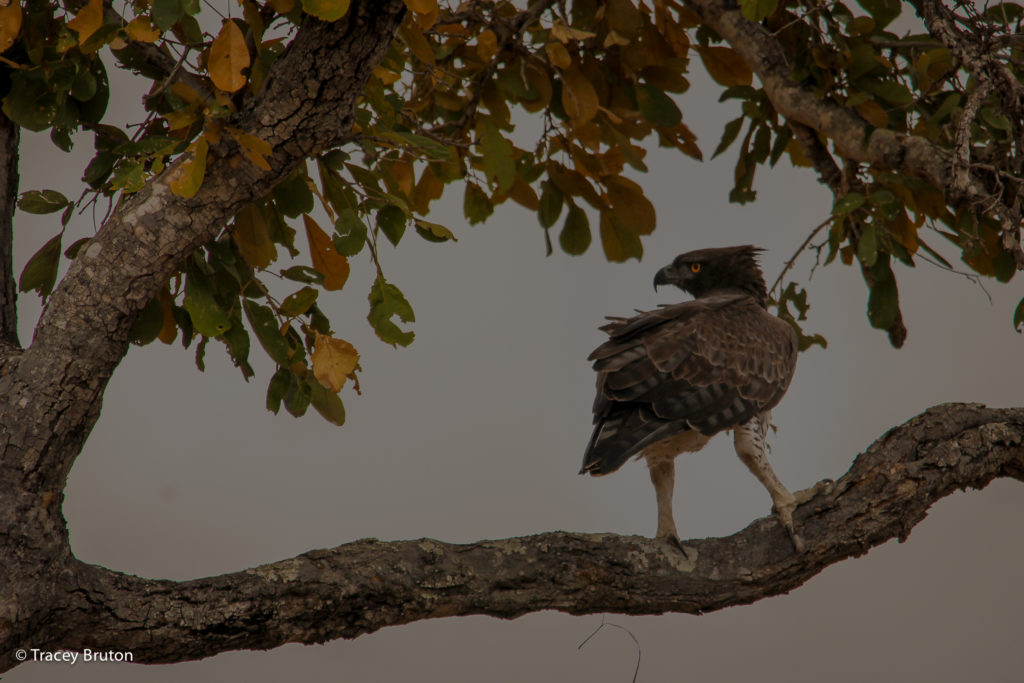 The guests that I have had thus far have been spoiled with incredible sightings of big five as well as African wild dog, hyena, hippo, giraffe and a multitude of other plains game, as well as your smaller more overlooked (but just as interesting) creatures such as dwarf mongoose, squirrels, baboons, termites, spiders, scorpions and chameleons. 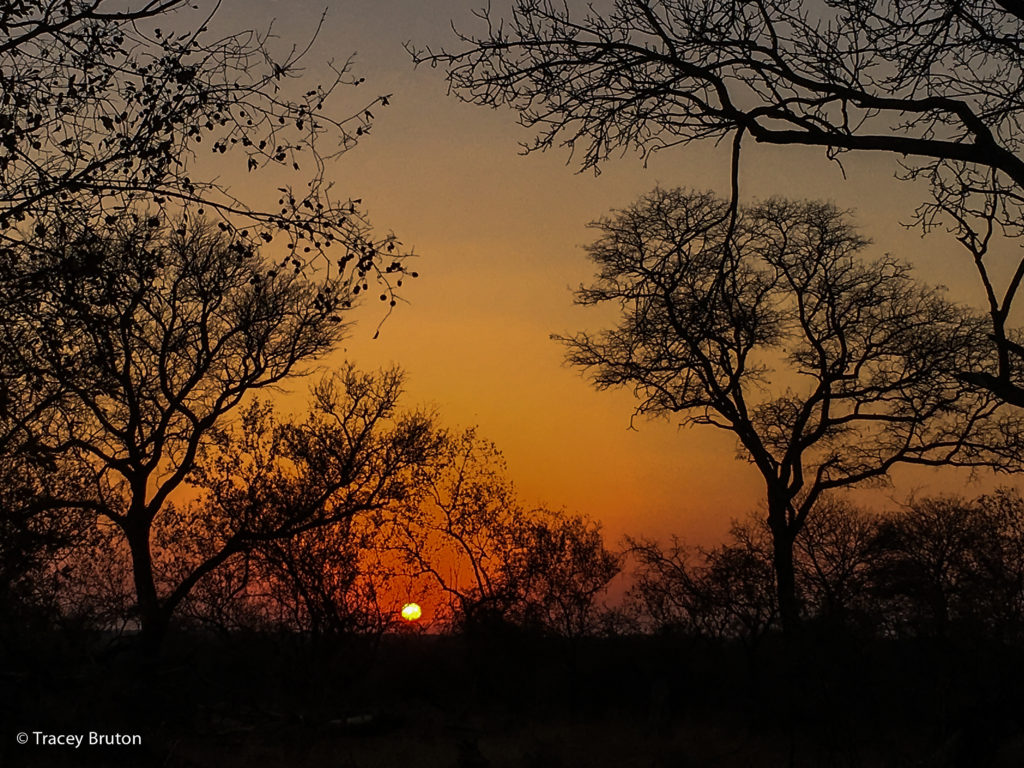 Bush walks are one of my favourite pastimes – being able to exercise out in wild African nature whilst inspecting its tracks and signs, creating a story of the goings- on of the morning like a newspaper on the ground. Bush walks takes you down to the animals level, and away from the noises of the cars engine to immerse you into nature where you can use all your senses to experience the bush. Feel the bark of the rough knobthorn tree with its spiny protrusions, the hard concrete- like termite mounds, and the difference between different herbivore dung. 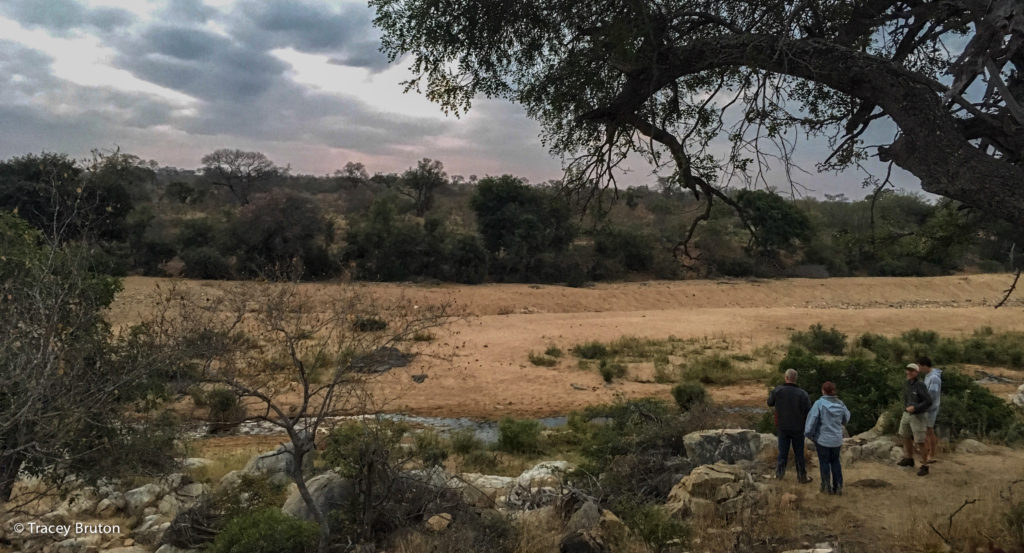 Dig into the dry riverbed and taste the pure sand-filtered water that seeps to the surface. Smell the musty scent of an elephant that passed by not too long ago, the popcorn- like aroma of a leopard’s recent territorial marking, or my favourite – the smell of mashed potatoes coming from the potato plant (Phyllanthus reticulatus) that emits the scent from tiny flowers in the evening. Decipher the tracks of animals that have walked on paths and roads, and try to find other signs of them having been there such as mud rubbed against trees, grass bent along their path, a feint scent, or leaves and twigs dropped whilst feeding. 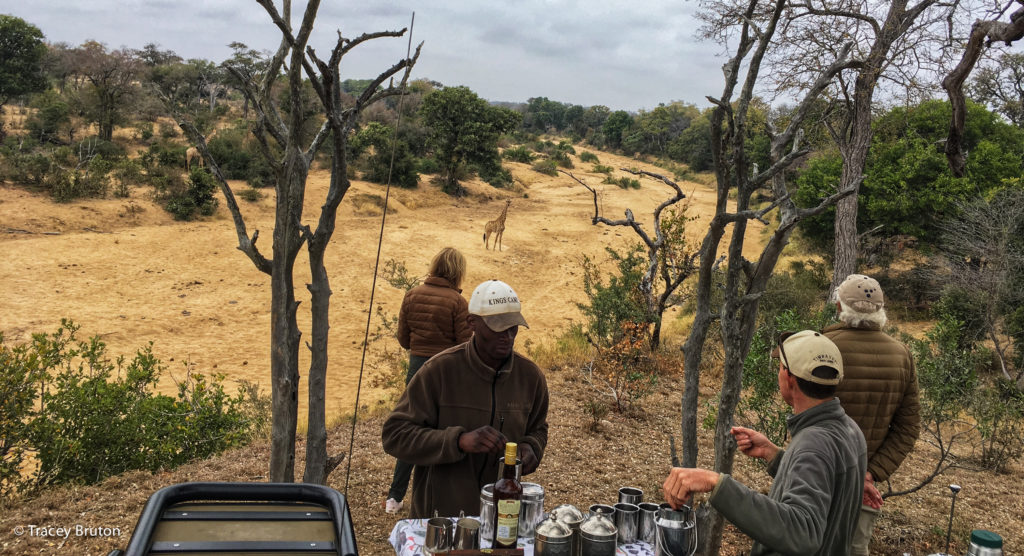 If you are very lucky, spy a large animal feeding or resting, safely at a distance and without disturbing it.
Sit quietly and absorb the peace of nature, its peaceful balance, the soft calls of birds, the rumbling of a distant elephant herd, your place in this world and the place of all of its creatures.

I already call Kings Camp my home. It is truly a magnificent piece of Africa.

4 thoughts on “My First Few Weeks at Kings Camp”