Collective Nouns of the Bush

Africa is home to a huge diversity of wildlife species, and equally diverse and fascinating are the terms (collective nouns) used for species or groups of animals, and even some plants. Each collective noun describes the shape, form or character of the animal, in an interesting and often humorous way!

Some of these are more familiar, such as a herd, pack, flock or pride, but many are lesser known and fantastically descriptive. Get familiar with these collective nouns and impress all those around you while on your next safari! 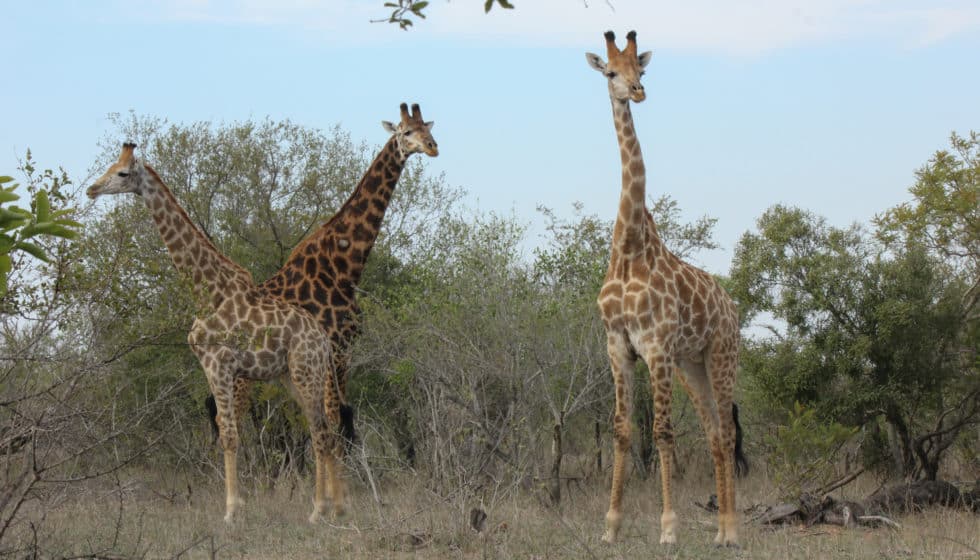 A tower or journey of giraffe

These words perfectly describe a herd of tall leggy giraffes as they stand gazing down on you, or stride gracefully across the savanna. 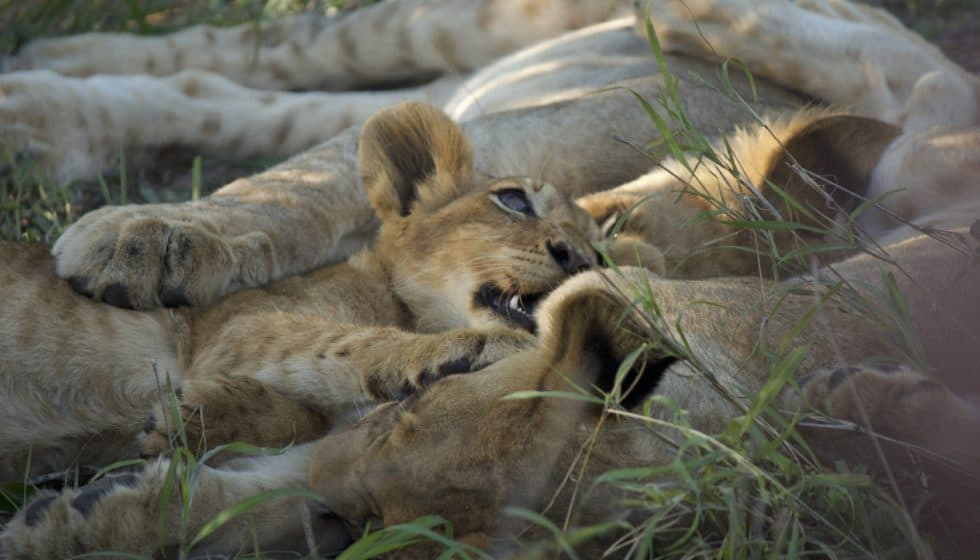 A pride of lions

Lions are majestic and regal, and are revered in many cultures. Male lions are symbols of kingly power and might, where females represent the Great Mother and protection. 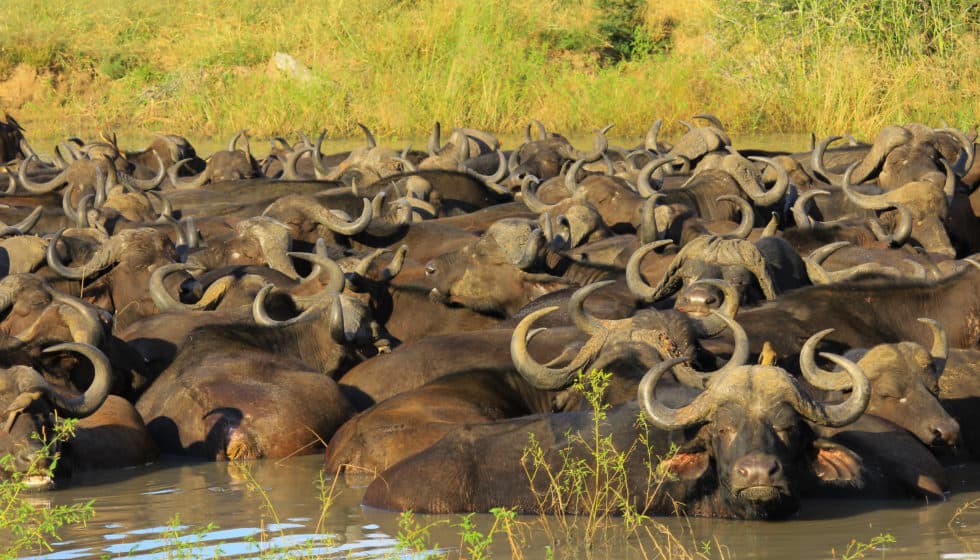 An obstinacy of buffalo

This is the perfect word to describe a group of these grumpy-looking bulky stubborn beasts. Whenever I come across a herd of buffalo, I feel all their eyes on me as they chew the cud and stare, with an expression on their faces like I owe them money! 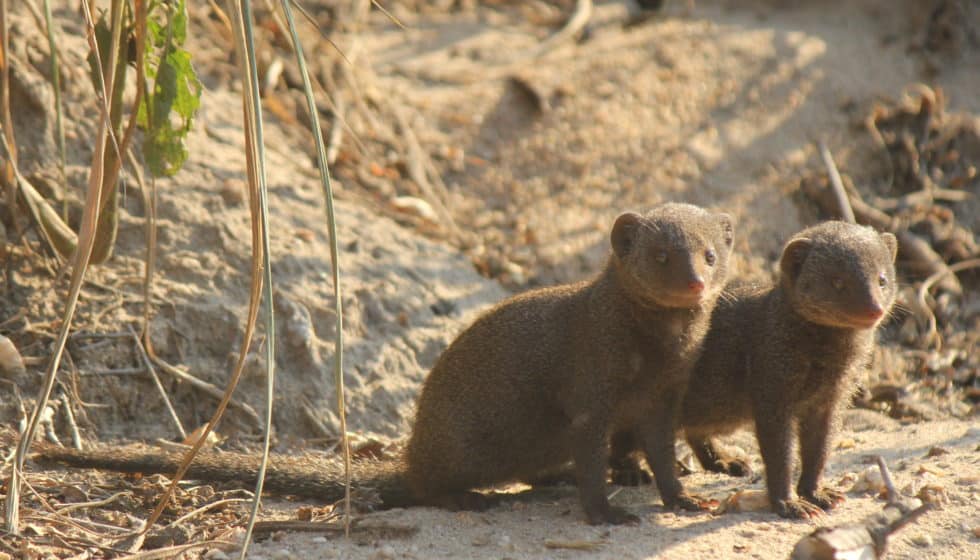 A business of mongoose

Perhaps this refers to the fact that they really get down to business when it comes to eating! Mongoose are small carnivores that feed on insects, arachnids, reptiles, birds, rodents, eggs and sometimes carrion. On safari at Kings Camp you may be able to see the dwarf mongoose, banded mongoose (both social species) as well as the solitary slender mongoose or nocturnal white-tailed mongoose. 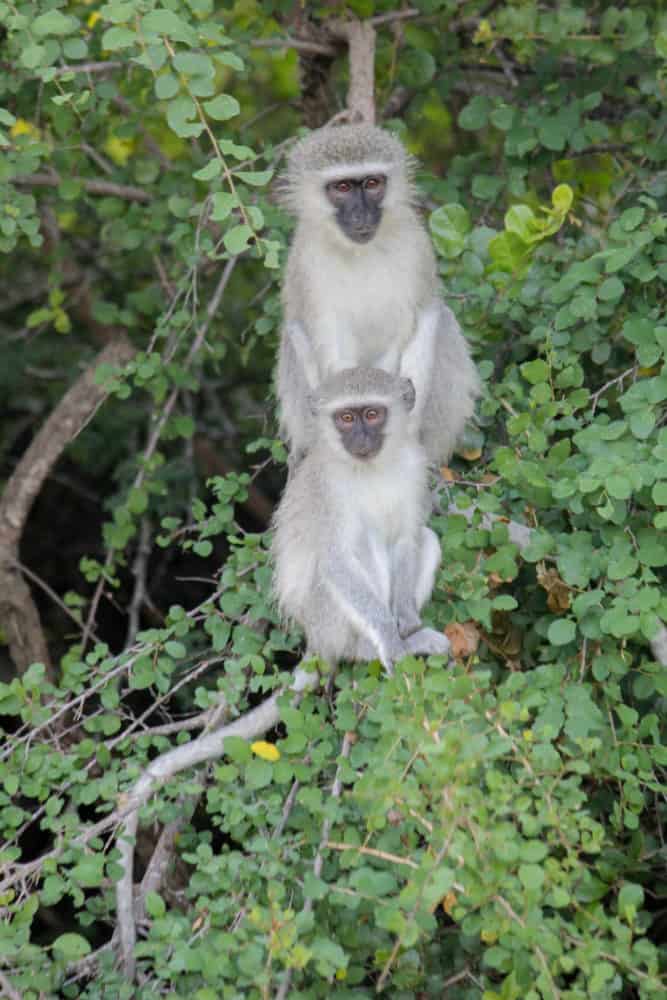 A barrel of monkeys

This alludes to the playful and amusing behaviour of these primates! The best place to watch the antics of the vervet monkey is at Kings Camp lodge itself, where a family of monkeys lives safely within the confines of the lodge, relatively safe from predators, especially high up in trees at night where they sleep. 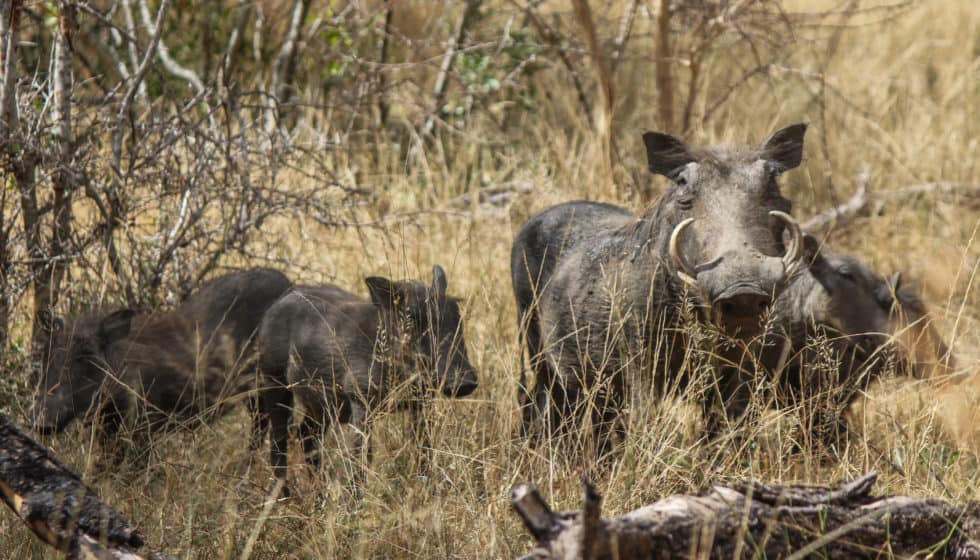 A sounder of warthog

If you have ever been close to a warthog, you would have heard the gnashing of tusks against each other as they eat, or the grunts as they keep in contact with each other. Perhaps you may have also heard the deafening squeal of a warthog in distress as it is being attacked by a predator. 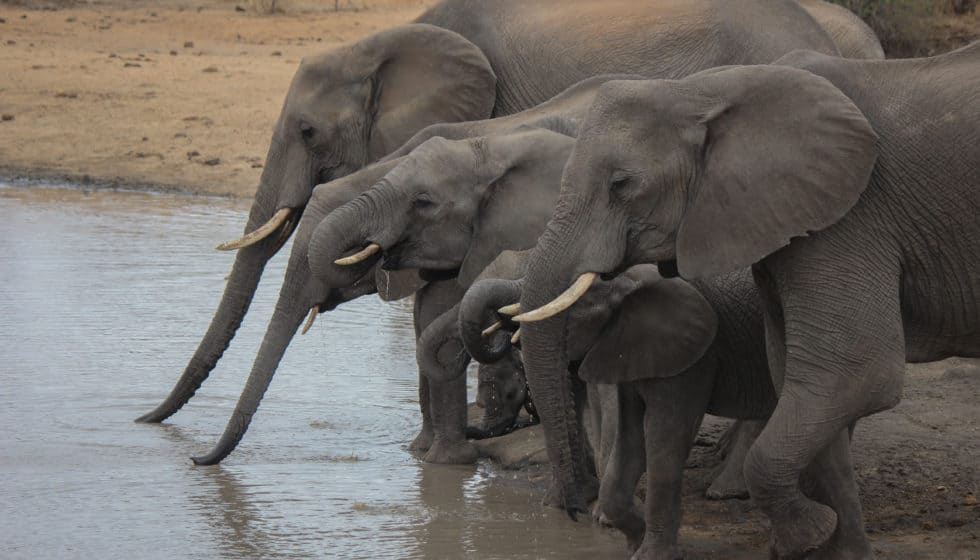 A memory of elephant

Elephants are said to have an extraordinary good memory and intelligence. The matriarch of the herd is able to remember where to find good food and water in the past. 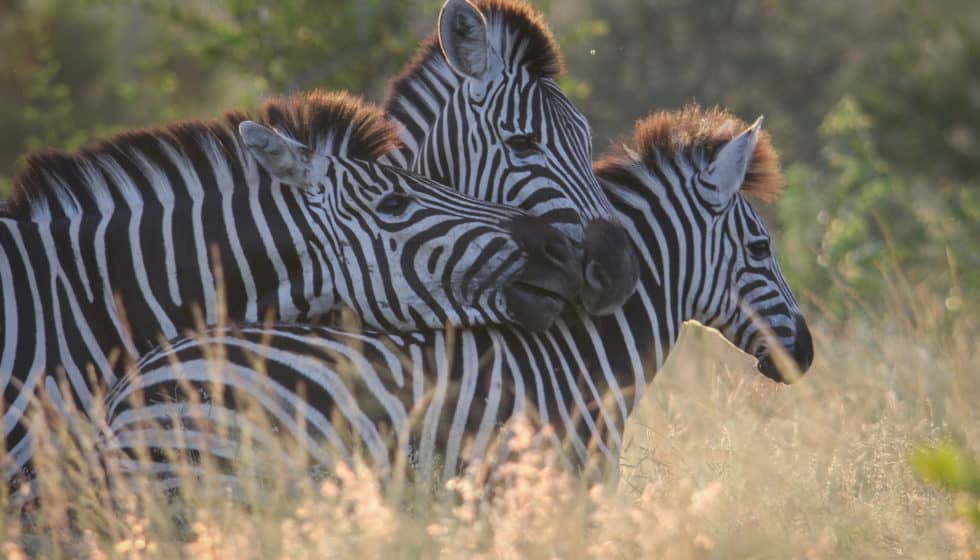 A dazzle of zebra

Zebra are one of the most striking animals in the African bush, and always capture the attention of visitors. There is a variety of functions of the stripes, including confusing a predator by motion dazzle – a group of zebra standing or moving close together may appear as one mass of flickering stripes, making it more difficult for a predator to pick out a target. 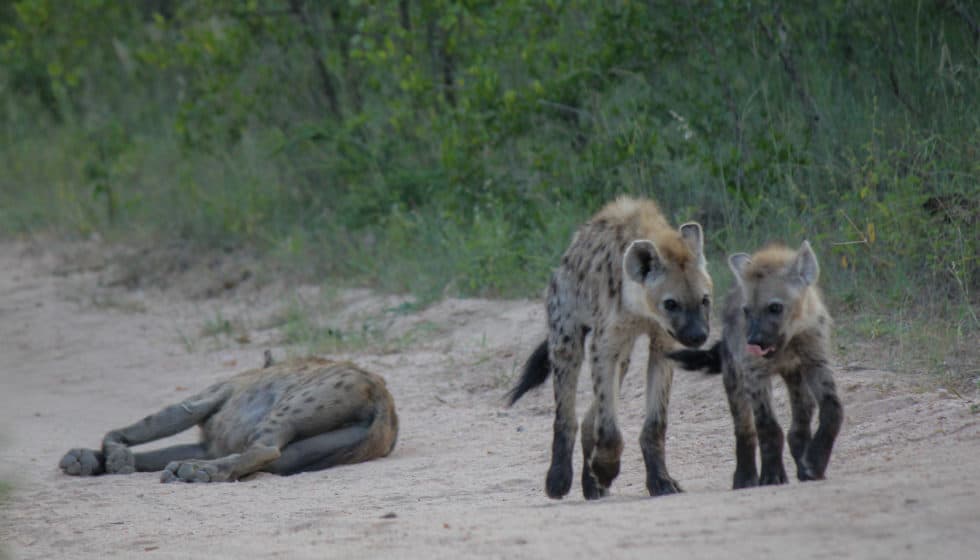 A cackle of hyena

Hyenas have a wide range of vocalisations. Scientists have identified as many as 14 sounds that communicates specific information to the rest of the clan. The hysterical giggling sounds of the spotted hyena are used to convey frustration, excitement or fear. 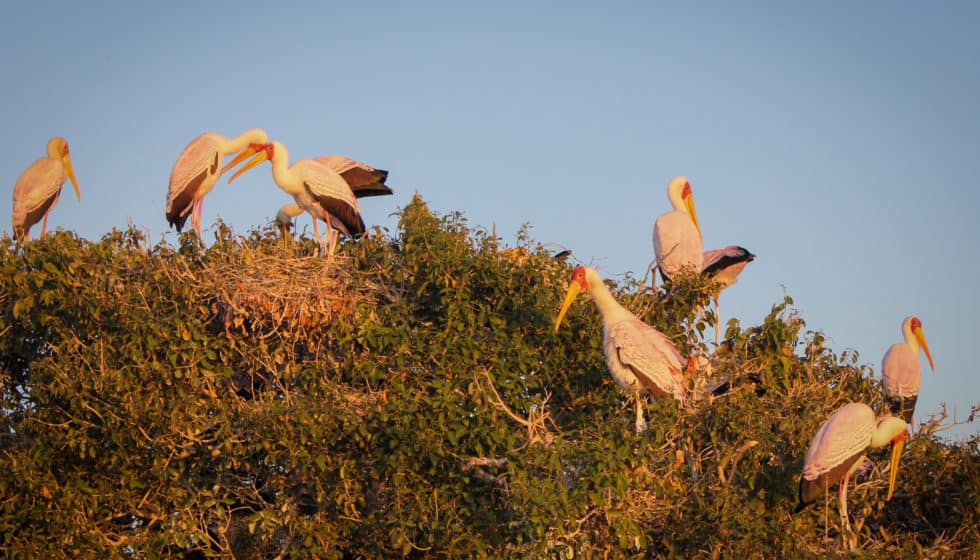 A mustering of storks

‘Mustering’ refers to the assemblage of troops before a battle, and seeing a group of storks clustered together with their long beaks and long legs may look like an army of soldiers with swords! 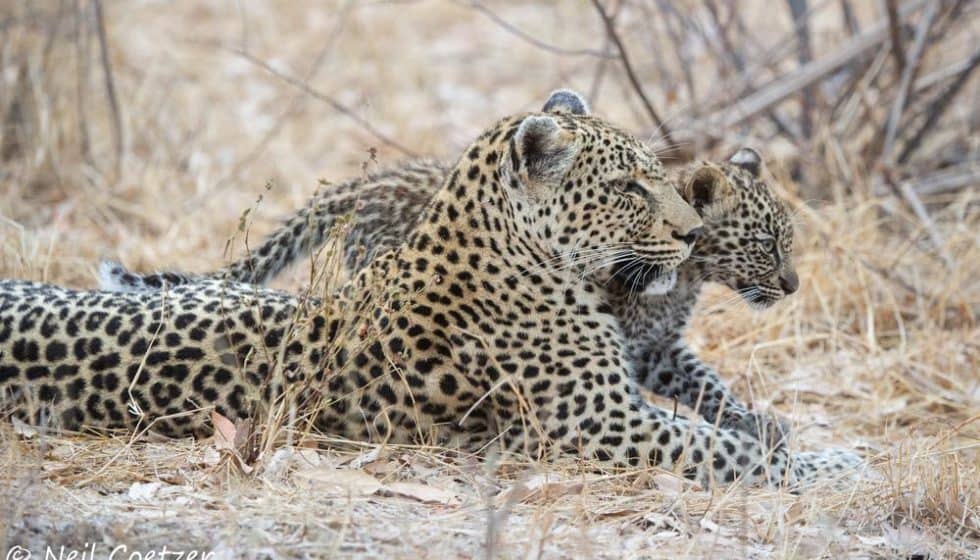 A leap of leopards

Leopards are expert climbers, and you may be lucky enough of safari to witness how a leopard expertly and gracefully leaps up into a tree to escape from pesky hyenas or other enemies. 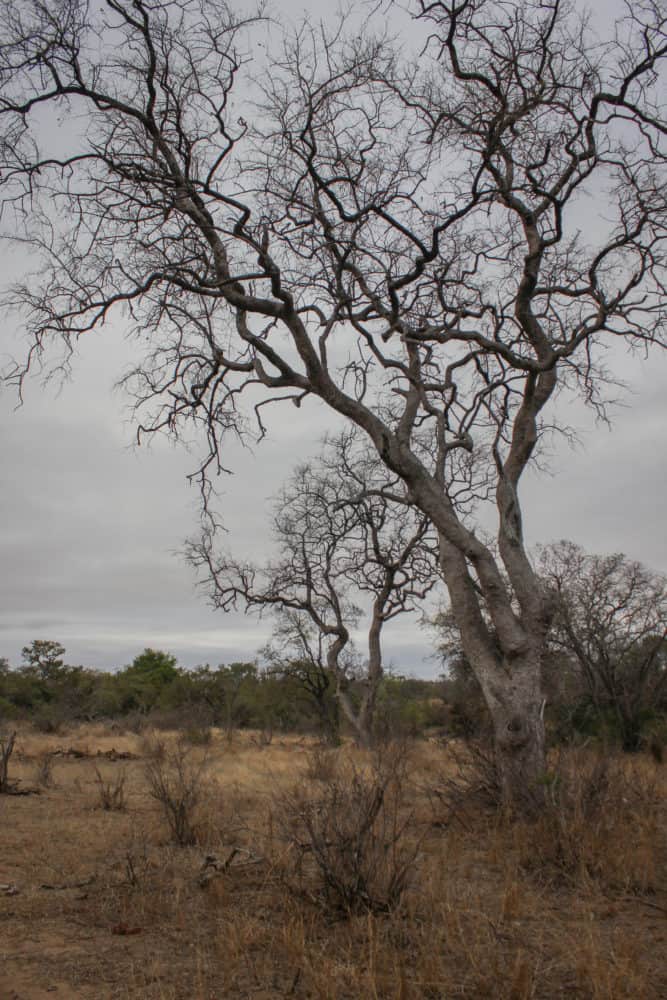 Leadwood trees, with their often leafless lower lateral branches (functioning to store toxins), light grey crocodile-skin bark and a beautiful gnarled appearance when older, look like they came straight out of a children’s storybook. 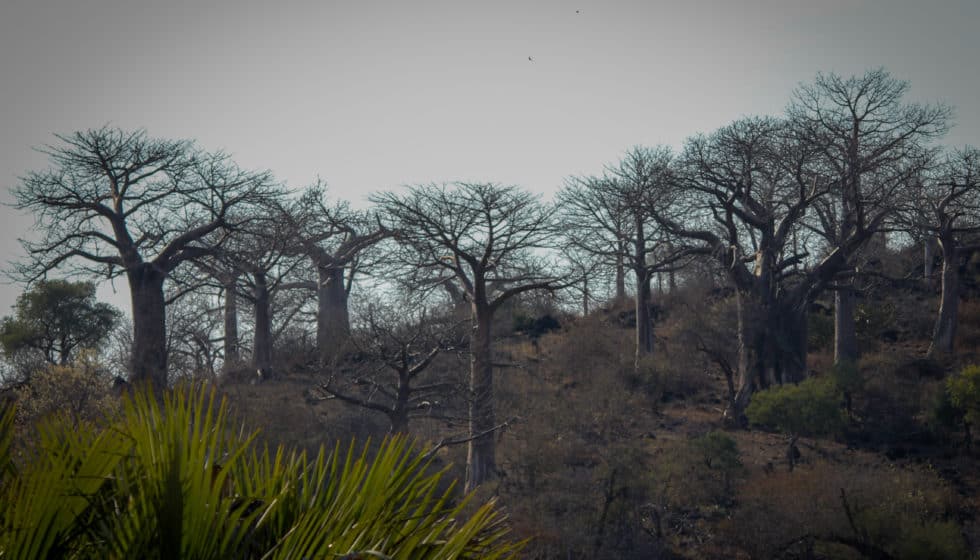 A stillness of baobab

Baobabs grow to enormous sizes, and some have been carbon dated to 3000 years old! These massive trees dot the bushveld in places like sentries, and standing under one, one really feels a sense of awe and wonder. 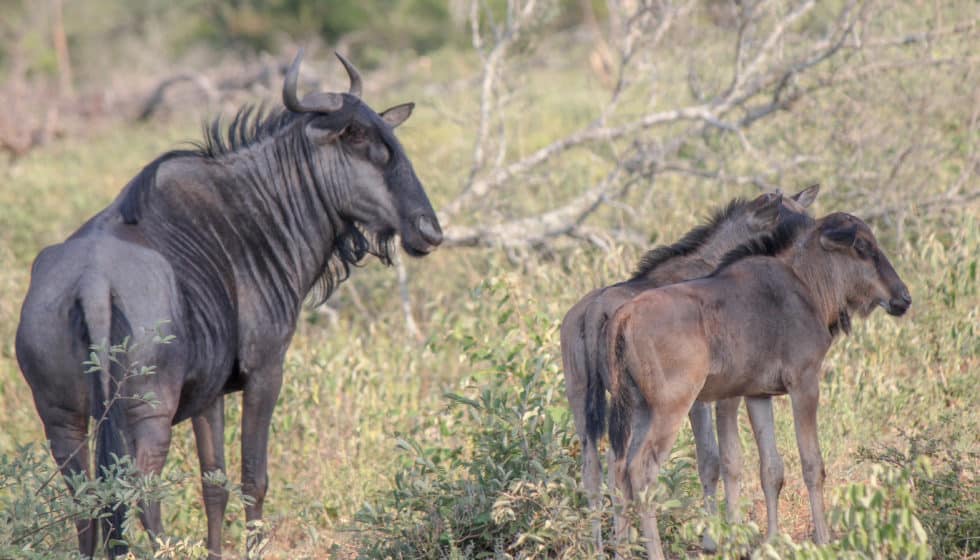 An implausibility of wildebeest

The origin of this term is not known. Perhaps for the person who created this term it was impossible to believe the sheer numbers of wildebeest herds in the Great Migration? 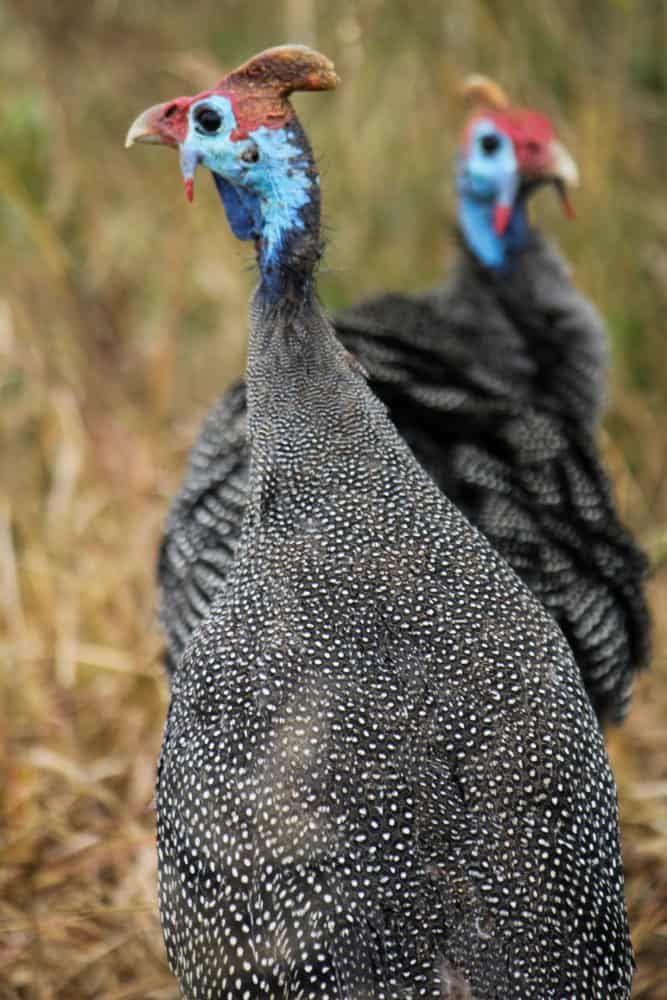 A confusion of guinea fowl

The charismatic helmeted guinea fowl, with their blue and red facial skin and black and white spotty feathers appear to be pretty crazy and confused a lot of the time, chasing each other around and following a leader that is forever changing. They prefer to run along the ground when disturbed and only take off explosively and noisily at the last moment. 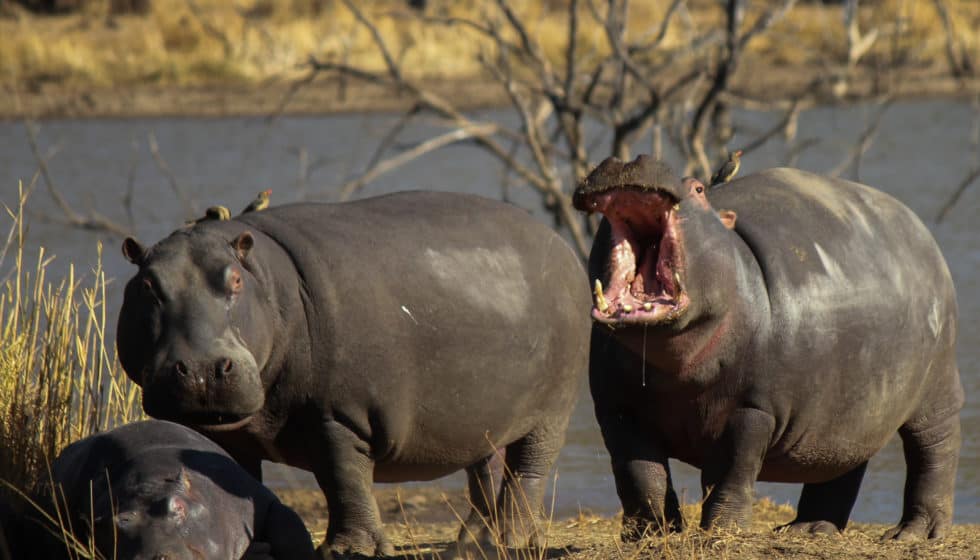 A bloat of hippo

Lazing in the water during the day and at times basking on the river bank like beached whales, these hefty animals earn this term for sure. 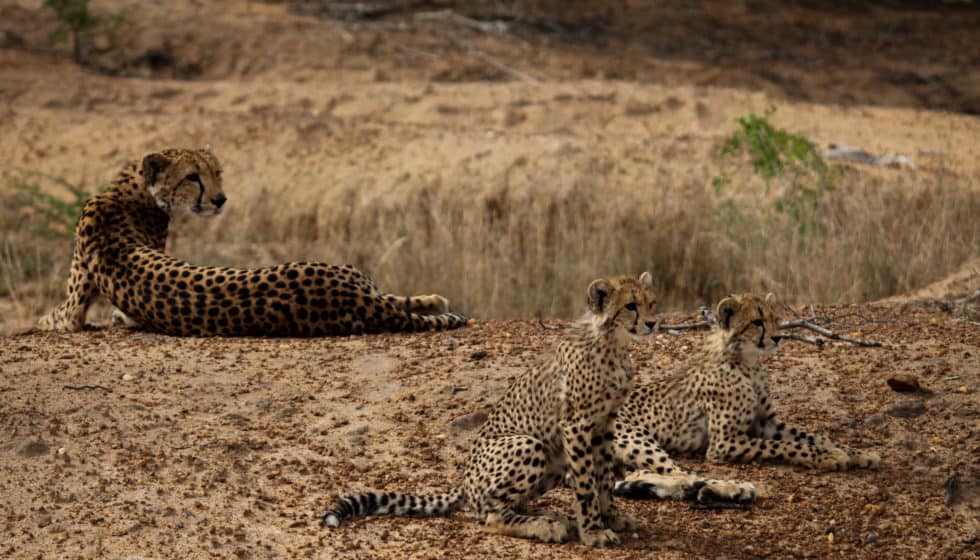 A coalition of cheetah

Adult cheetahs may be found alone or in all male groups called coalitions. These are most likely two or three litter mates that have stayed together to defend a territory against other males. 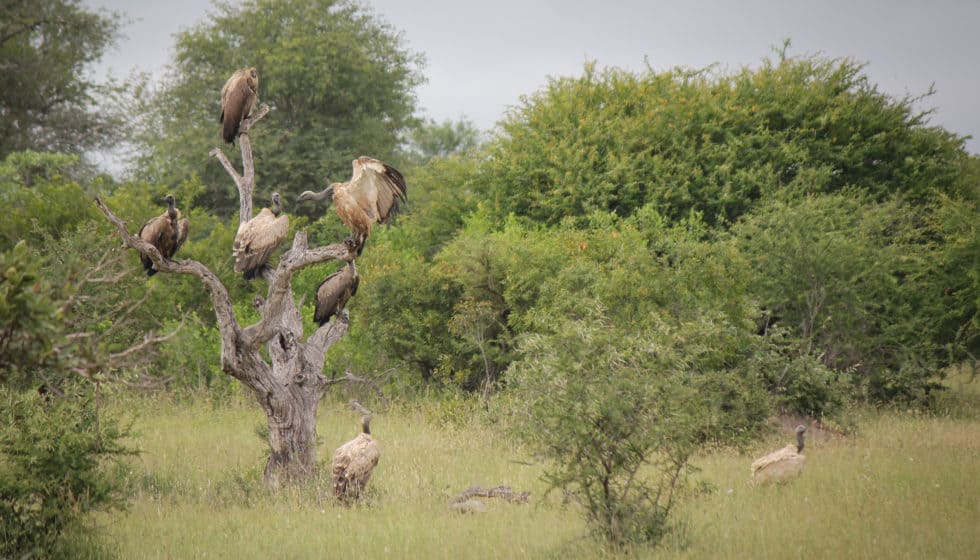 A kettle, venue or wake of vultures

Vultures have a large number of collective nouns, which vary according to their behaviour! Vultures circling overhead, riding thermals as they search for carcasses are called ‘kettles’. When they are seen descending to the ground to a carcass they are called a ‘wake’, and perched in a tree they are called a ‘committee’ or ‘venue’. 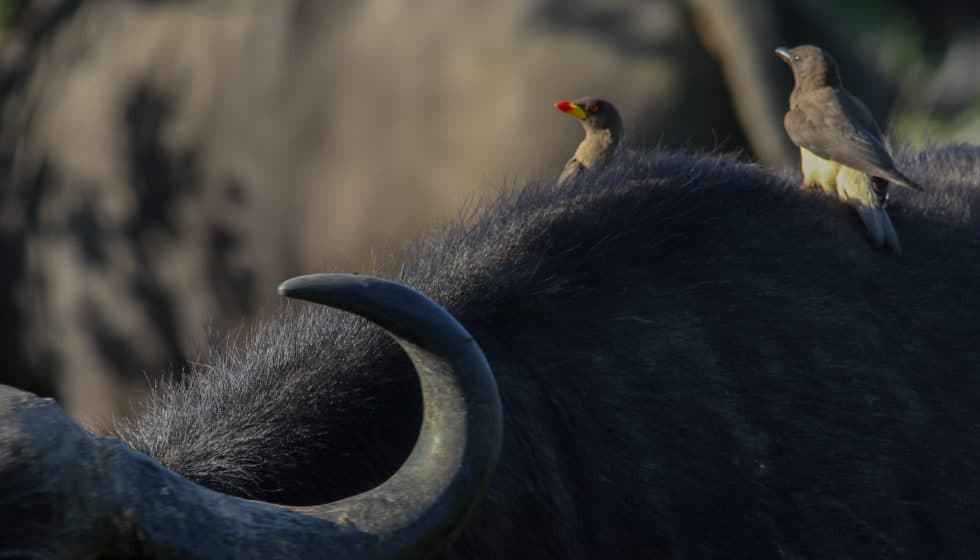 A fling of oxpeckers

Perhaps this pertains to the fact that oxpeckers fly up noisily at any disturbance, creating an early warning system to the host animals they sit on and feed off of, such as buffalo. 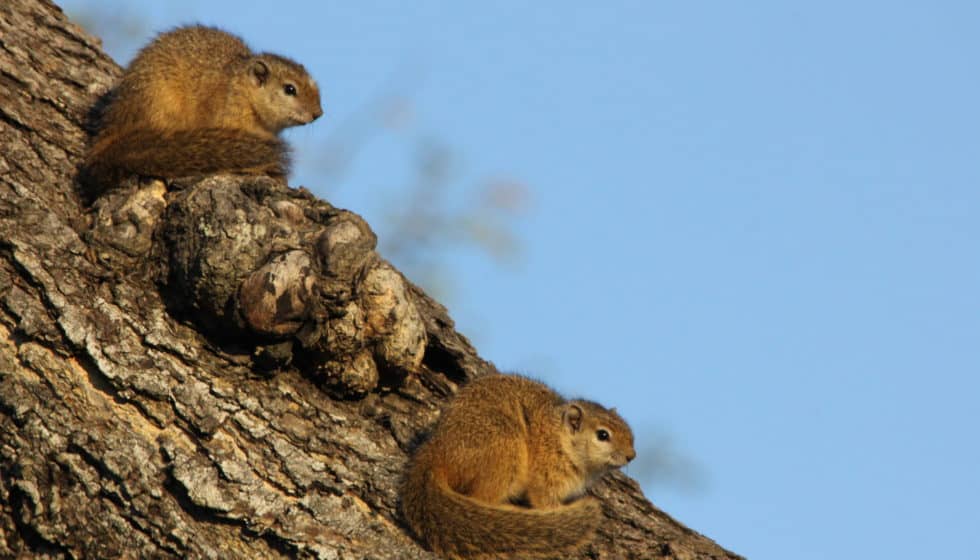 A scurry of squirrels

When one sees squirrels on safari you most often see them scuttling across the road and up a tree, and then into a hole (called a dray) or up to a fork in the tree to peer down at the disturbance. They are very territorial and will fight to the death to defend their area. 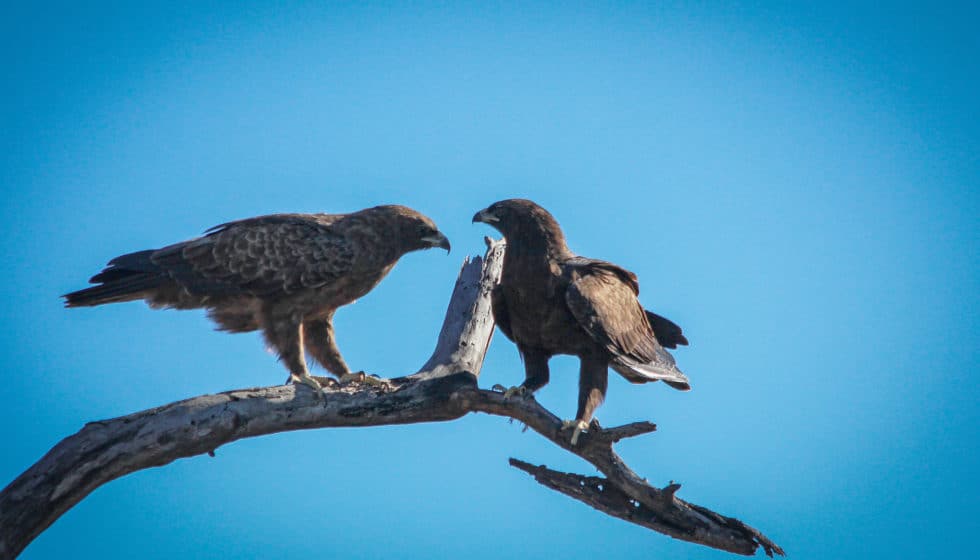 A convocation of eagles

A convocation is a group of people formally assembled for a special purpose, which is a lovely name for a group of eagles as these birds always look so formal wearing what looks like dark coats and serious expressions! 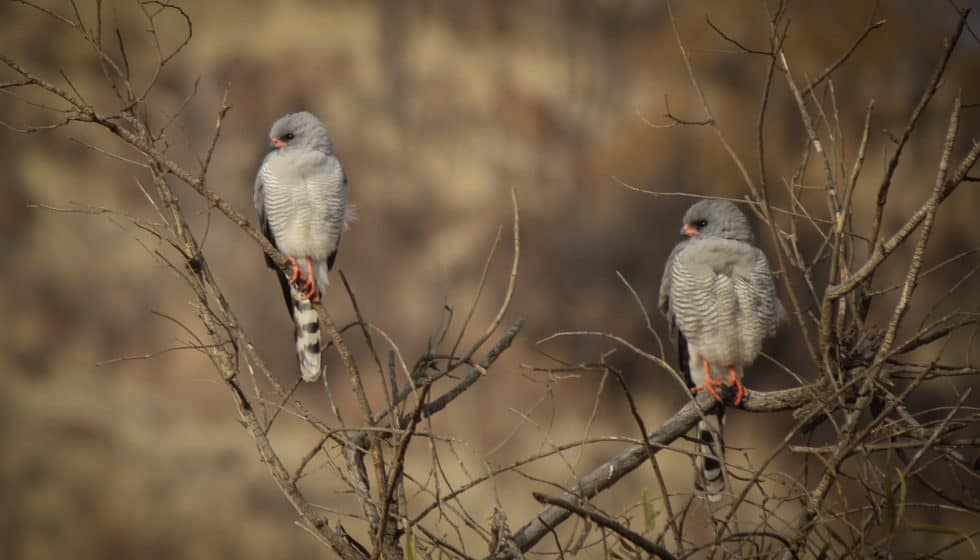 A cast of hawks

This term may have originated from the ‘casting’ – or releasing to fly from the fist – of a captive hawk. Wild hawks flying in large numbers are called a kettle. 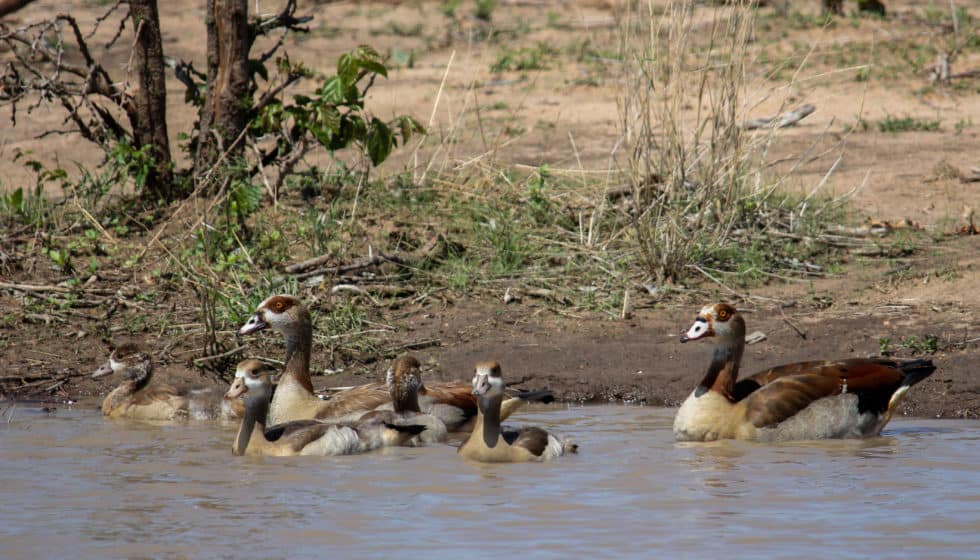 A gaggle of geese

This term comes from the Old Norse ‘gagl’ relating to the noisy chatter of geese. Flying geese are called a skein, a team or a wedge, and when flying close together are called a plump.

Here are a few more collective nouns for animals you may find on safari: