My journey to becoming a Bushbuck Mother 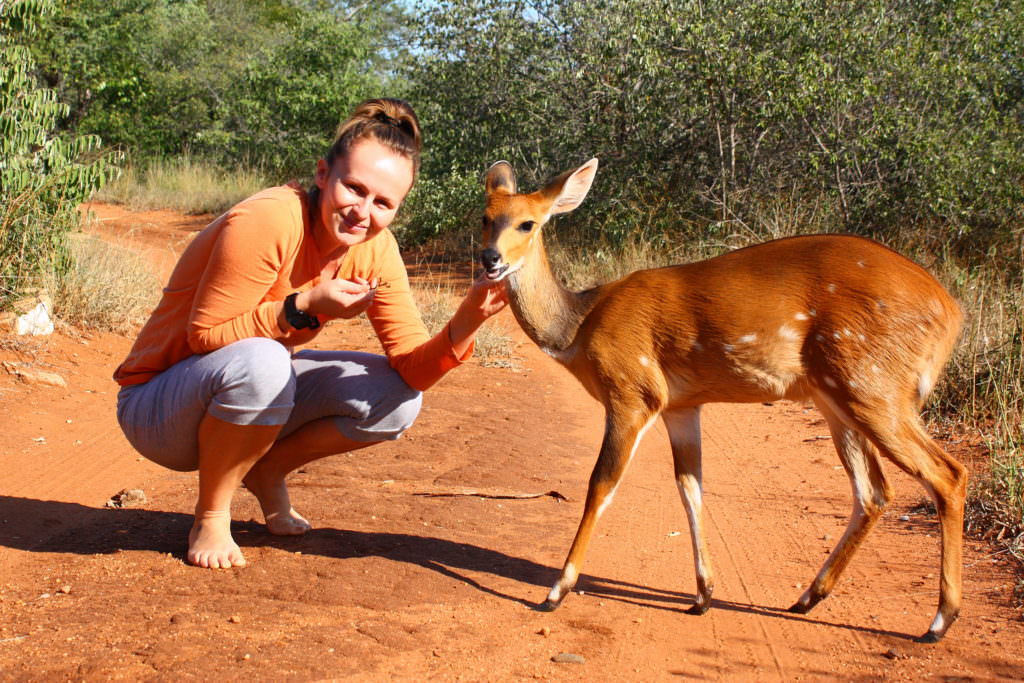 PHOTO: Her visiting me at home once she was wild.

Last September I was on holiday and General Manager, Warren Moore contacted me to let me know there was a baby bushbuck around Kings Camp that wasn’t getting milk from its Mum due to the Mum having an injury.

The Mum was still around but the Buck was so tiny, just a couple of days old, with her umbilical cord still noticeable, she kept running up to people in desperation for food, obviously realising she wasn’t going to survive just following her Mum around.

Warren, Lisha and their two children, Cathan and Sveva started feeding the young buck on a milk formula whenever they saw it around, sometimes it would disappear for a couple of days and then be back and the Mum was still around, but could barely walk so had stopped producing milk due to her fighting for her own survival. 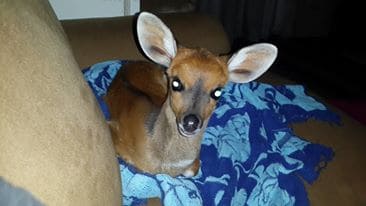 PHOTO: her as a young baby on her spot on the sofa.

Returning from my trip I found the young buck in the bush close to one of the rooms where it was known to sit during the day and brought it home. To say it was love at first sight, at least from my side, would be an understatement and to this day I get tears in my eyes when I watch a video I took off her the day I started taking care of her.

She would have died had we left her in the wild and probably would have only lasted a few days. Her Mum couldn’t feed her and eventually was caught by a Leopard in camp.

With much advice from my friend, Nicci Wright, who is the best in the Wildlife Rehab business I managed to create a new milk formula specially for bucks, I made this up each day and bottle fed her a few times a day, I also had to help her go to the bathroom after each feed and clean/groom her.

Right from the beginning she was quite cheeky, we used to put her in a box at night, but she soon learnt how to jump out and she wanted to jump onto the bed and sofa with me, so the box didn’t last too long.

Initially I had to carry her in the box to the area when I first found her each day and leave her out for the whole day (hidden away from danger), trying to feed her and then would collect her at night but this wasn’t going to work for long.

A fence was constructed around our garden in a matter of 4 days and it was such a relief to let her run free around the garden and she was so happy to be outside, running and jumping and ‘bucking’.

We lived with blankets all over our house so that she wouldn’t slip on the floor as a broken leg could be a fatal injury so that was something we had to get used to.

Grant Murphy (My rehab assistant!) collected branches for her every day and hung them all over the fence while I bottle fed her a few times a day. We also lived with branches all over our house, so it was like living in a jungle! I can’t remember how many times we stood on a thorn! 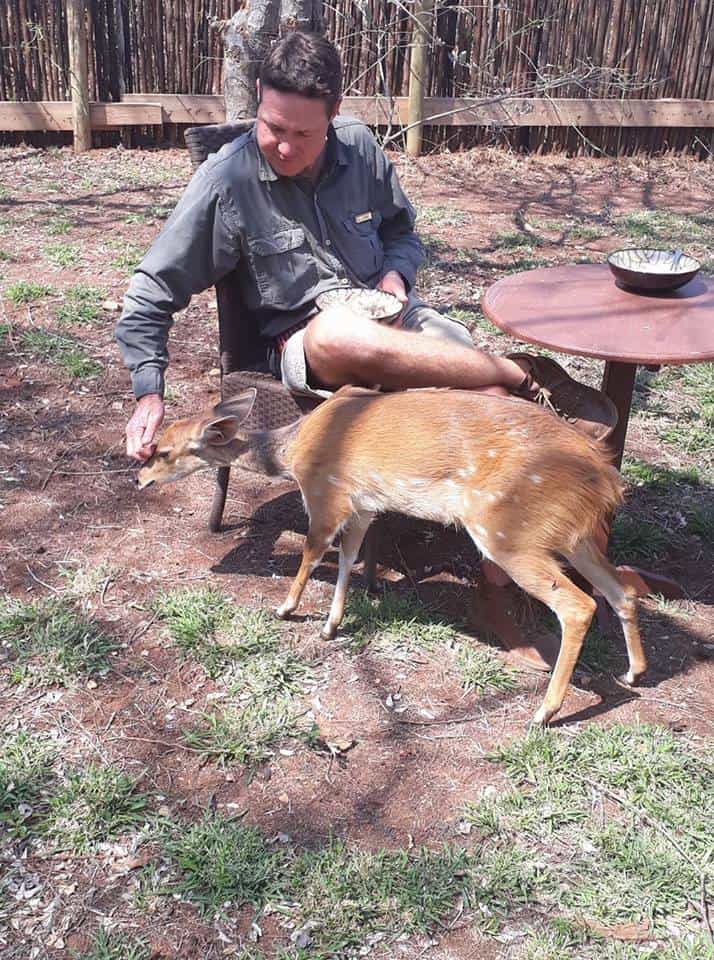 PHOTO: Grant grooming her, this is since she is wild, but she comes by everyday. 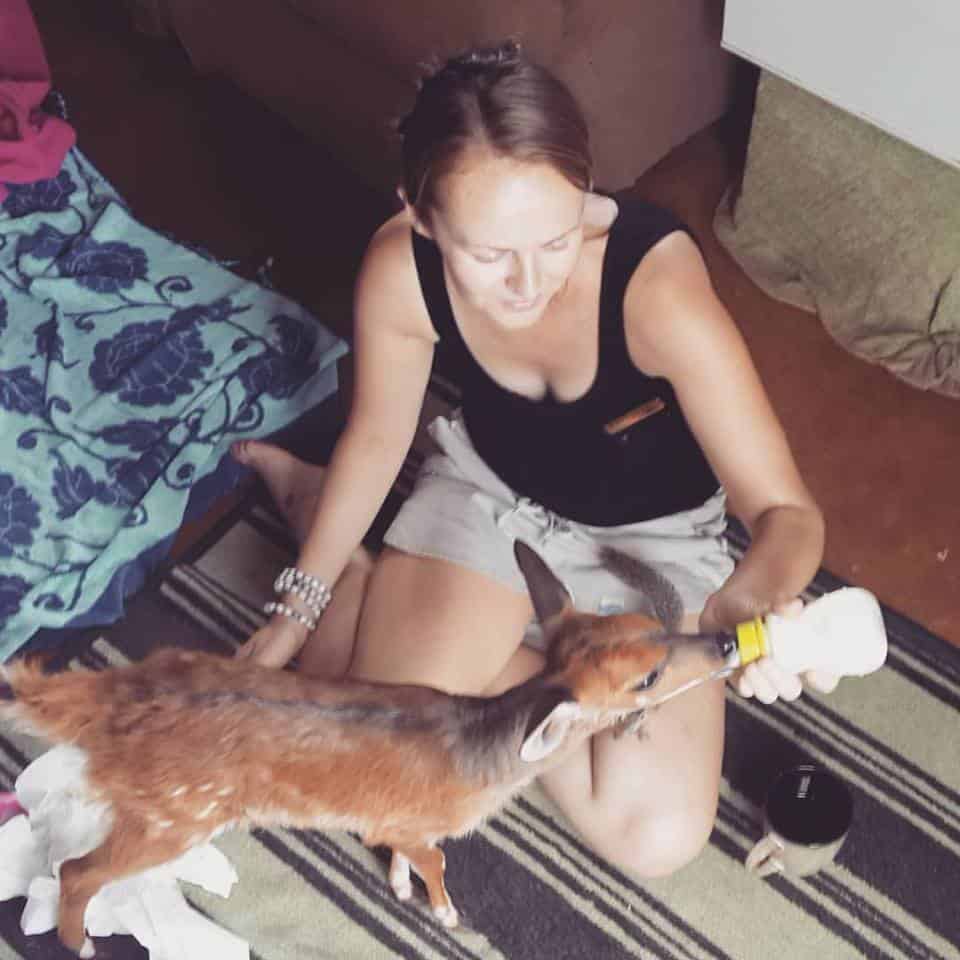 PHOTO: getting one of her feeds, and yes there is a Squirrel on my leg that I was also looking after, any Squirrels I had used to ‘groom’ her, but also chase her around the house and nibble her legs.

We had to pretty much cancel any ‘holidays away’ as I couldn’t leave her, I remember once I tried to leave her for 2 weeks and had a surrogate Mum (Nicolene Jordaan) stay in our house to look after her (she had bottle fed her with me there before) but as soon as I left she went on a hunger strike and refused to take in her milk which would have proved fatal as she would have dehydrated very quickly. Luckily on day 4 she started to feed and stopped calling for me as often, just as I was about to book a flight home. 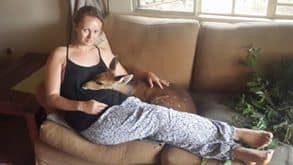 PHOTO: This day she was sick, it was the worse day in the whole process (we had been away for 2 days) she again had refused to drink from anyone else and we think became dehydrated, luckily with the vets help we gave her some special formula and it hydrated her.

She slept on our sofa for many months and would sit next to me in the evenings, if Grant came close to the sofa she would ‘huff’ and ‘snort’ at him and spread her legs out so that he couldn’t sit down at all! I even remember a time when Grant and myself ate our dinner on the floor, so she could have the sofa to herself.

She was our priority 100% and we made sure she was safe from predators by bringing her into the house before dark each night as we have many Leopards that come into the Camp grounds and they could easily come over our fence.

This meant I had to be home every night before dark of course, so not much of a social life for many months. 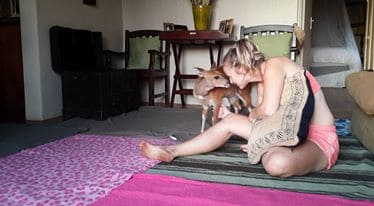 PHOTO: Grooming time in our lounge, note the blankets covering the floors so she doesn’t slip.

We would watch what other bushbuck ate and bring her different flowers and seed pods so that she had a good variety of food.

She had a boyfriend buck who used to visit her, and he would sit on the other side of the fence next to her, so it was good she still had interaction with the other bucks as they would all come around the fence to drink water close to our house. (He is still around now and they spend a lot of time together)

Then the weaning process began, and this was very hard as I had to very slowly and gradually give her less milk each day, she wasn’t happy about this and would hit me in the legs with her head when she wanted more milk. 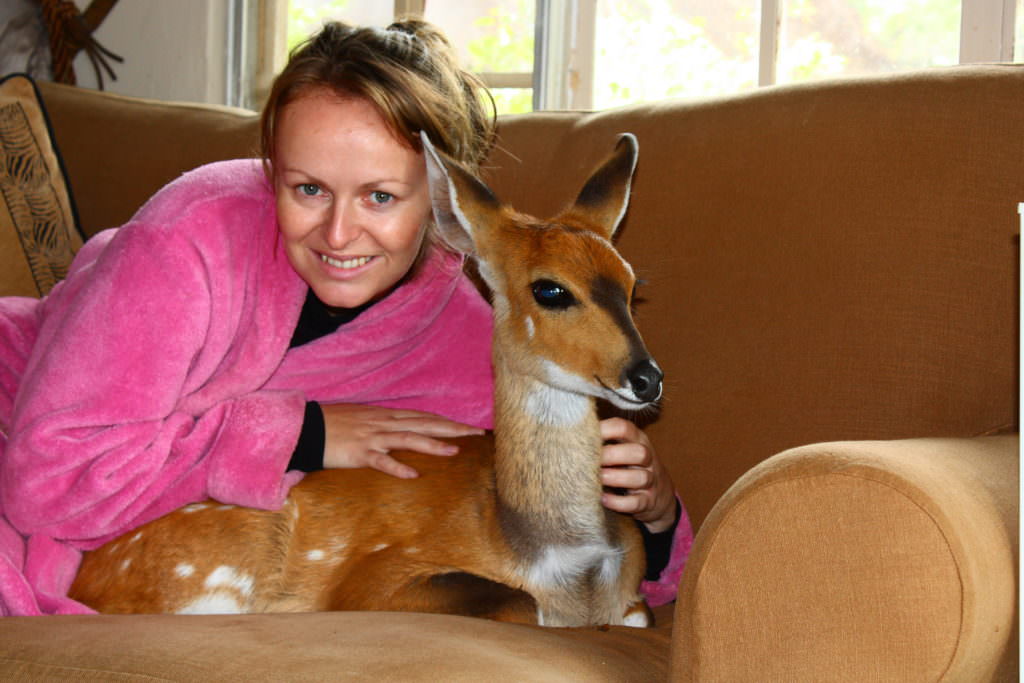 PHOTO: Some cuddle time on her favourite spot

Eventually she was fully weaned and then came the day to let her out of the garden to be fully wild and free, I had very mixed feelings about this as I thought I would never see her again and I was going to constantly worry if she had been taken by a predator.

We walked around together for a while and then she drifted off into the thick bush, thinking that was the last time I would see her there was nothing more I could do but hope for the best for her.

About half an hour later I was told she was looking for me, so I found her again and put her back into the garden, over the next few days this is what happened each day and she would go out and started coming back on her own normally late afternoon.

She also would follow me everywhere in the lodge and walk straight through reception into my office daily much to the amusement of the staff and guests. She has also figured out to come to my window at ‘knock off time.’ 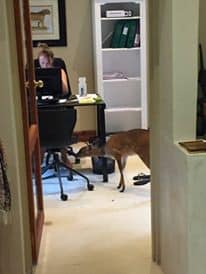 PHOTO: Me trying to work while she waits in my office.

One day she came home just before dark and I was there with the gate open, but she decided she would sleep out in the bush in the wild alone for the night, from that day on she slept outside except on the odd occasion when she came home and wouldn’t leave so we had to let her stay on the sofa, also to be honest there have been a couple of times when we have collected her as there was a Leopard in Camp.

It’s always been easy to get her as she comes when I call ‘Baby’ and seems to hear me from very far away and comes running.

There are many stories of me looking for her for hours or running around in my PJs when I have been informed that there are predators in camp. I try my best to keep her safe, but she is fully wild now and it doesn’t appear that her difficult start to life has stopped her from being very ‘bush wise’

She also once fell into the swimming pool, in front of all the guests and luckily in front of me so I jumped in, fully clothed (and with my phone in my pocket!) and swam her to safety, bushbuck can actually swim, but its highly unlikely she would have found her way out unless I had been there.

I still see her every day and she normally come’s home in the morning. As she gets older (now a year and 2 months) and the rains arrived and therefore more food available, she ventures a bit further out of camp and I expect to see her a little less.

We also think she is mating with the dominant male in the Camp so maybe she will become a Bushbuck Mother herself some day in the not to distance future, which will make me a Bushbuck Grandmother! I can’t wait! 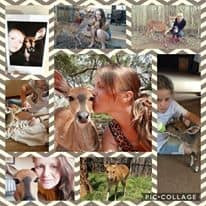 PHOTOS: Collage of a few photos of her, note the one on the far right when she was very tiny but she is growing fast and I’m hoping she will make it to fully grown adulthood.